Back to News
Published on 2 March 2022Time to read: 7 minutes
The viscosity index (VI) is a characteristic commonly used to indicate the viscosity of a fluid at different temperatures. The smaller the viscosity variation, the higher the VI. Viscosity index modifiers are able to modify this property, helping to maintain adequate lubricity at different temperatures, which is a fundamental characteristic of lubricants.
Viscosity
Viscosity is the property that determines the shear strength of a fluid.
It is one of the most important properties in lubricants, as it is responsible for determining the oil film thickness, improving the system’s lubricity and reducing friction and wear, which avoids unscheduled maintenance.
Furthermore, viscosity influences heat generation in some systems; determines the sealing effect of an oil and consequently its consumption rate; and it also defines how smooth machines will start working in low temperature conditions.
Viscosity can be determined by measuring the force required to overcome fluid friction in a film of known dimensions. When measured this way, it is called the dynamic or absolute viscosity, which is usually reported with the unit Poise (P).
The kinematic viscosity can be obtained by dividing the fluid dynamic viscosity value by its density, when measured at the same temperature. The most used unit for this property is centistokes (cSt).
Kinematic viscosity can be obtained with the aid of calibrated glass capillary viscometers, by measuring the time required for a specific volume of fluid subjected to gravity to flow through the capillary. One of the most recognized reference methodologies for this analysis is ASTM D445.
The measurement of Saybolt viscosity is also made with the aid of a viscometer, which has a cylindrical section and an orifice at the bottom. Viscosity is obtained by measuring the time it takes for 60ml of fluid to flow into another container. The method that describes this analysis is ASTM D88 – 07 and the result is reported with the unit Seconds Saybolt Universal (SSU).
Viscosity index
Viscosity Index (VI) is the property of a fluid that quantifies the relationship of viscosity with temperature. A low VI indicates a greater difference in this relationship, while a high VI indicates a relatively small change, which is important so that the lubricity of the equipment is not affected at different temperatures.
The VI of mineral oils produced through the conventional refining route varies depending on the refinery technology, and may be below 0 and even slightly above 100. Hydrotreated mineral oils and some synthetic oils may have a VI above 120. The VI is considered to be very low when it is less than 0, low between 0 and 40, medium between 40 and 80, high between 80 and 120, and very high above 120.
The VI is calculated based on an empirical scale created by Dean and Davis, which has standards with two series of oils: one arbitrarily considered as VI equal to 100 and another designated as VI equal to 0.
For the VI of an oil to be calculated, it is necessary to measure its viscosities at 40°C and at 100°C. Then, the calculation is made from its viscosity at 40°C and the viscosities at 40°C of the standards, having a viscosity at 100°C equal to that of the oil whose VI is sought to be determined, according to the formula below:

Figure 1 - Typical PIB molecule
PIB is a liquid polymer, clear, transparent, chemically stable and non-toxic, being used in several applications due to the wide variety of grades with different molecular weights.
Low molecular weight grades have lubricating properties, while high molecular weight products are used as viscosity index improvers and thickeners in lubricants.
Furthermore, an important characteristic of PIB in several applications is its clean burning, that is, PIB is totally vaporized when it is above its decomposition temperature, around 250°C with no ash residues.
PIB is widely used in the industrial lubricants market and its application has grown in the sugarcane industry due to its high viscosity and high VI, in addition to being non-toxic and water repellent.
Evaluation of the viscosity index of mineral oils with PIB
Viscosity analyses were carried out at 40°C and 100°C and the calculation of the viscosity index in mixtures of mineral oils with PIB at Escola SENAI Conde José Vicente de Azevedo.
The viscosity analysis method was ASTM D445 and for the viscosity index was ABNT NBR 14358/2012.
ISO VG 32 and ISO VG 15 mineral oils were used as well as Braskem’s PIB32, PIB128 and PIB240.
In Tables 1 and 2 some typical properties of these products are shown for reference.

Table 2 - Typical properties of the PIB grades used in the analyzes
Source: Braskem company website
Table 3 shows the composition of the analyzed samples. The objective was to maintain the viscosity at 40°C of the mixture around 30 cSt, for comparison of VI results. Thus, it was  ecessary to blend the ISO VG 32 mineral oil with another one of lower viscosity, ISO VG 15, since the PIB grades used were more viscous. 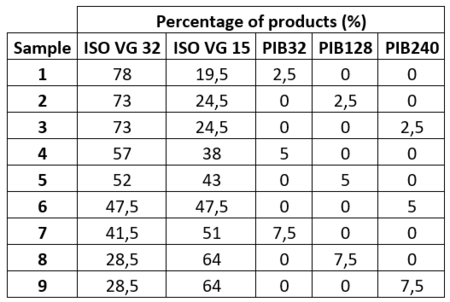 Table 3 - Composition of analyzed samples
Table 4 shows the results obtained. In Graph 1 it is possible to compare the values of the viscosity index of samples with different percentages of PIB.

Graph 1 – Viscosity index by grades and percentage of PIB
The results presented show that higher molecular weight PIB grades provide a greater increase in the viscosity index of the lubricant. A higher concentration of PIB also leads to an increase in the VI.
Oils rated ISO VG 32 are widely used in hydraulic gears. In addition to the VI increase, PIB offers the advantages of not generating residue, increasing the separation of water from oil, and has anti-drip action due to its high tack.
The use of viscosity index improvers allows lubrication to be efficient at different temperatures, which increases equipment life and lowers maintenance costs.
This article is written by:
Nathalia Bastos Domingos
Application Engineer / Vinyls
Braskem